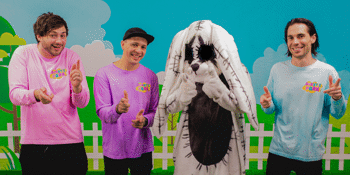 Drastic Park are a 3-piece Punk Rock band from Melbourne Australia. Lovingly referred to by Josh Merrial (Short.Fast.Loud) as a “very exciting young punk band” who can “write a damn catchy pop punk song”, Drastic Park have built a fanbase that love them for their distinct throw-back sound, as well as their comedic antics on stage and on social media. In the past two years they have played a plethora of sold out shows, supporting the likes of DREGG, Antiskeptic, Agnes Manners, Terra, and also embarked on a triple headline tour with Clay J Gladstone and Wolf & Chain. More recently, the band has signed with Destroy All Lines for all bookings and secured a slot at the inaugural Knight and Day festival.

The band are celebrating the release of their latest single Deadline, which is a song about being set up for failure at a young age and spending your whole life worrying about deadlines. From the bands perspective we are all on a time limit with everything we do in life, including life itself being limited. So comes the second meaning of the song, implying we are all waiting in line for our inevitable death. Therefore, the track purposefully mixes genres and experiments with structure in order to mimic the twists and turns of life. And what better way to celebrate this existential dread than to have Drastic Park playing a headline show at The Leadbeater hotel with special guests. If the bands music video is anything to go by you will not want to wiggle your way out of this one.