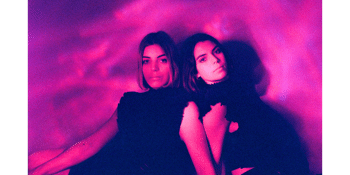 The Leadbeater Hotel (Richmond, VIC)
Thursday, 30 June 2022 8:00 pm
4 days away
18 Plus
Music
Send this event to
Lily and Grace Richardson - aka CLEWS - make candied grunge that sparkles with lush harmonies and iconic songwriting.

Undeniable songwriting prowess and two soaring lead vocals that harmonise like honey have been the backbone of CLEWS since they first burst onto the scene with their 2018 debut ‘Museum’. Now, after a string of powerful singles including 'Crushed' and this year's 'Overluck', CLEWS are gearing up to offer their first EP 'Loveluck Omens'.

CLEWS kept busy in 2020, using their time off the road to focus on creating their first body of work with producer Dylan Adams (DMA's, West Thebarton). They have recently returned to stages in Sydney supporting DMA’S, Tash Sultana, selling out two headline shows at The Lansdowne, and always putting a personal touch to each of their appearances for their audiences they now consider part of the big CLEWS extended family.

For Lily and Grace, their universe has revolved around music for as long as they can remember and they continue to weave together the music they love to listen to with the music they love to make. CLEWS have carved out a distinct sonic identity of strong, melodic vocals, lush production and the organic sound of a high energy band that echoes elements of the pop-rock artists they love - everything from '90s britpop and '00s indie rock to the harmonies of Crowded House and Oasis anthems they were raised on.

The band’s development as a live act has influenced their songwriting; with a certain looseness and a natural approach to performing putting their light and loving dynamic as sisters on display and permeating through their new studio sound. Having built a reputation as a formidable live act both in Australia and the UK, CLEWS have become more than just a band to watch.