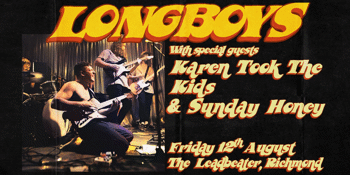 Karen Took The Kids & Sunday Honey
The Leadbeater Hotel (Richmond, VIC)
Friday, 12 August 2022 8:00 pm
47 days away
18 Plus
Music
Send this event to
It’s been a while between drinks. LongBoys are keen to get back into the swing of things with this headline show at The Leadbeater Hotel!

Forget about the cold weather with LongBoys’ sunny guitars, warm coastal tones and carefree lyrics. They’re in the studio right now recording an album packed full of new tunes, so get down to The Leadbeater on August 12th to be the first to hear ‘em!

LongBoys are stoked to have Karen Took The Kids and Stanley Hotel join them for this show.

Karen Took The Kids are a surprising and inventive 5 piece. The group of friends started off writing music in their drummer's garage in 2019 and burst into scene with the release of their debut single "Postcode Anxiety" in 2021. Get ready to hear some top-notch indie garage pop from Karen Took The Kids.

Sunday Honey are a four-piece alternative-rock band from the Mornington Peninsula, describing their sound as a cross between honey soul and a mixture of old rock. They’ve just released their debut track ‘Old Mate Bill’ and are getting some serious traction behind them!

Come down for a sick show and wake up thinking “Why Can’t I Feel This Way Every Morning?”