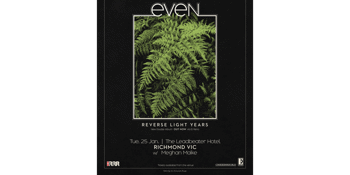 With MEGHAN MAIKE
The Leadbeater Hotel (Richmond, VIC)
Tuesday, 25 January 2022 7:00 PM
8 days away
18 Plus
Music
Send this event to
EVEN prove that Melbourne is the greatest music city in the world by playing north, south, east & west all in the one weekend.

"This show is the same show that was originally slated for the Queen's Birthday Weekend 2021, which has been rescheduled a few times since them. The premise of the show was to celebrate the great rock’n’roll city that is Melbourne; that premise remains the same, but now EVEN has a great new album to celebrate too, their best-ever ARIA Album Chart debut (#18) and a Double J Feature Album for their first-ever Double-LP REVERSE LIGHT YEARS”.