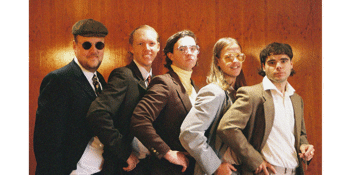 TBC
The Leadbeater Hotel (Richmond, VIC)
Saturday, 6 November 2021 8:00 PM
20 days away
18 Plus
Music
Send this event to
The Velvet Club are set to unveil their new single ‘Everything’s Changing’ May 7, a slice of delightfully relatable, jangly indie rock. Written and recorded on the brink of Melbourne’s 2020 lockdown, ‘Everything’s Changing’ explores the experience of finding a new sense of direction.

Along with the release the emerging indie-rock band announce they will be embarking on their first Headline tour in over a year. Playing shows in Sydney, Brisbane, Melbourne and Adelaide kicking off on the 5th June.

Forming in 2018 in Melbourne, the five-piece consisting of AJ, Sam, Tom, Dos and Macca have taken their emphatic live show from backyards to playing support for the likes of Great Gable, Eskimo Joe, Dulcie and Death by Denim.

Returning in 2021 with the single 'Alter Ego', the band have kicked off the year with two sold out headline shows in Melbourne at The Workers Club and The Tote and are excited to be releasing their next jangly single 'Everything's Changing' and heading around the country.