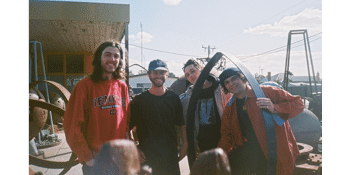 Majak Door are a sly surf-rock, 60's psychedelia, dreamy wave pop hailing from Melbourne, Australia. Named after their favorite AFL footballer Majak Daw, the six-piece band began touring relentlessly over 2018-19, releasing 2 EP's ‘Weird Guy’ and ‘Samples Of The Solar System’ to critical acclaim from fans and peers alike. Although 2020 wasn’t what anyone had hoped for Majak Door pushed through releasing not only their very chilled take on Stardusts ‘The Music Sounds Better With You’ but two exciting new singles ‘Everybody Wants You’ and ‘Will She Leave You’ receiving strong Triple J airplay and honorable mentions in media outlets like Pilerats and features on Spotify editorial playlists like ‘Indie Arrivals.’

Once the brunt of 2020 had finished, the band were immediately back in action playing shows across Victoria while they waited for the other state borders to open up. In 2021 the band has already sold out multiple shows including The Workers Club and Wrangler Studios in Melbourne and supporting close friends Loose Bricks on their headline run of dates back in April with multiple dates all selling out.

June and July sees Majak Door taking on the east for the first time in 18 months post national pandemic lockdowns. Exploring a lot of new places and taking South-West-Sydney-siders The Shang along for the ride.

In recent times, The Shang embarked on their four-date ‘East Coast Tour’, pulling audiences left, right and centre, eventuating in another SOLD OUT Sydney show at none other than The Lord Gladstone, Chippendale. The four horsemen of the far South West have since released two singles, ‘Long Way Up’ and ‘Games ft. Rops1’ receiving triple j unearthed rotation, plays on ‘Home and Hosed’ and ‘2020’ with Richard Kingsmill. With praise from industry heavyweights, such as their own parents, their heavily obliged mates, and further heavily obliged significant others, The Shang are thought to be setting down a path travelled by many, but conquered by few. Stay alert, for the tale of The Shang from The Wild (South) West will continue…

With many things to be announced in the very near future and such an exciting pairing of Majak Door and The Shang playing across the east coast, these are shows not to be missed